I need to be honest with you

I believe that it is imperative that leadership is transparent and honest.

Yesterday I published a statement comparing my fundraising totals in March to the two purported frontrunners, Peter MacKay and Erin O’Toole.

Since then some people have challenged the numbers, including Peter MacKay himself, so I wanted to explain exactly where I got them.

Erin O’Toole published his donations since March 5th himself.

For Peter MacKay, I did a little bit of math.

Peter MacKay stated himself on March 5th that he had raised one million dollars, which you can see here: 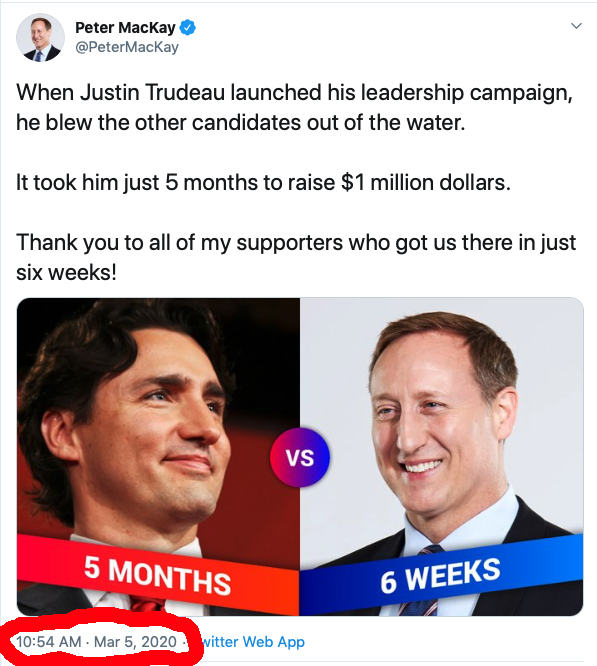 Elections Canada confirmed that Peter’s fundraising total for January 1 to March 31 was just above $1,045,000.

If we take Peter’s tweet at face value, then that means only $45,000 was raised after March 5.

If the amount actually raised after March 5 was $240,000 - as Peter now states - then that would seem to indicate the original tweet was not correct.

I took Peter at his word, so if the numbers are now shifting, I hope Peter can clarify the difference. It’s important that we as Leadership candidates model transparency because that is what our members expect.

Honesty and transparency are important to me.

In my line of work as a lawyer there are serious consequences for misrepresenting facts.

I will bring these values to the political sphere.

Our grassroots members must have every confidence that our party is being run with the utmost transparency.

Our members need to trust that all nominations will be carried out fairly.

Our members need to trust that the Conservative Fund is managing your donations well, with appropriate accountability.

Honesty and accountability will be core to my leadership.